The evolution of creationism; Kitzmiller 10 years on

December 20th is the tenth anniversary of the delivery of judgement in Kitzmiller v. Dover, an important anniversary for proponents of evolution science, and Nick Matzke, who coordinated the National Center for Science Education’s efforts at that trial, has celebrated it in the most appropriate possible manner. He has applied the methods of evolutionary tree building to the development of creationism itself in the intervening decade. The results are alarming. 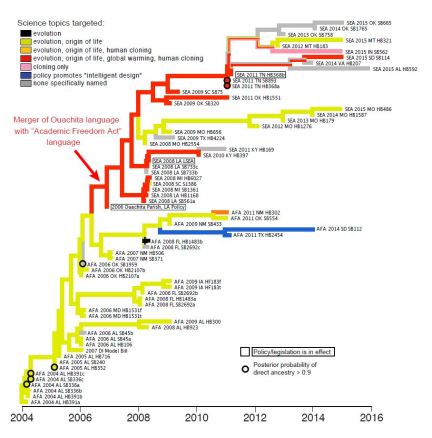 The case arose when Tammy Kitzmiller and the other parents challenged the decision of Dover Area School District Board to introduce the Intelligent Design pseudotext Of Pandas and People to their High School, along with a statement urging students to retain an open mind about Intelligent design as an alternative to Darwin’s theory”. Since the matter has been extensively discussed by me and numerous others, I will simply say that Pandas was an incoherent attack on evolution science, full of factual and logical errors, and that the statement to be read misdescribed evolution as a theory about the origin of life, and claimed that since it was a theory it was uncertain, and, moreover, that there were gaps missing from it. Drafts subpoenaed for the trial also showed that the text had originally referred to “creation science”, being hastily modified when an earlier case established that “creation science” was simply another name for religious creationism.

The case is significant as a test of the creationist claim that Intelligent Design is not a form of religious creationism, but, on the contrary, legitimate science. Judge Jones’s magnificent rejection of this claim runs to 139 legal pages; in brief, he found that this claim was baseless, the textbook error laden, the Designer no other than Christian God (in whom, incidentally, Judge Jones believes), and the arguments offered as evidence for Design scientifically worthless. For this and other reasons, he declared ID to be “a religious view, a mere re-labeling of creationism, and not a scientific theory.” It followed, under the Establishment Clause of the First Amendment of the United States Constitution, that it should not be taught in any publicly funded school. Strictly, Judge Jones’s ruling is only binding in the Middle Circuit of the State of Pennsylvania, but such is the force of its arguments that I do not imagine any challenge elsewhere, unless the US Supreme Court at some future time falls into the hands of creationists.

The creationist response has been to seek yet another, less easily penetrated, form of disguise for their activities. Instead of promoting clearly defined positions, which could be subjected to legal scrutiny, they now speak of teaching the controversy, and put forward so-called Academic Freedom Bills, which invite critical examination of evolution. Who, after all, is opposed to freedom? Shouldn’t students be aware of controversy? And why should evolution be shielded from critical examination? Scientifically speaking, of course, there is no controversy, and neither teachers nor students require special legislative permission before critically examining any concept. So the purpose is, clearly, to provide a figleaf for those who want to claim that the basic concepts of evolution are uncertain, or that creationism provides a worthy alternative.

We have had, in the past decade, 71 of these Academic Freedom Bills introduced, in 16 separate states, and passed into law in 3, while the strategy has evolved as the creationist community has learned from its successes and failures. Matzke’s achievement has been to map this evolution. I imagine no one better qualified. He was the lead member of the National Center for Science Education teisam at the trial. Since then, he has attained a Ph.D. at University of California Berkeley, and spent two years as a post-doc at the National Institute for Mathematical and Biological Synthesis (NIMBioS), housed at the University of Tennessee. He is now recognised as a rising star in his field; a Discovery Early Career Researcher Award Fellow at the Australian National University and the author of some 30 scientific papers on topics related to evolution, with attention also to science education, and to the human impact on the environment.

Matzke has special expertise in molecular phylogeny, the technique by which differences in DNA are used to construct family trees. The basic principle is simple; that a mutation that became established in one species will, unless eliminated by chance, be found in its descendants. We can use such shared mutations to pick out groups of more closely related species, and the family relationships established in this way generally show excellent agreement with the relationships established long since on the basis of anatomical homologies and the fossil record.[1]

Not surprisingly, we can apply the same principle to manuscripts, and Dennis Venema, one of my favourite writers on evolution, has compared the two kinds of application in his series of articles, Genomes as Ancient Texts. But what did surprise me was to learn that the method was applied to mediaeval legal documents as early as 1827, although now texts are examined using programs and criteria of the same kind as those in use to establish DNA phylogenies (see Phylomemetics – Evolutionary Analysis beyond the Gene, free download here). Similar reasoning has been applied to languages since 1850, and both Charles Lyell and Charles Darwin drew attention to the similarities between biological and linguistic evolutionary trees.

What Matzke has now done is to apply the principle to the content of the antievolution bills discussed above. Unfortunately, the paper in which he presents his findings, in the prestigious journal Science, is behind a pay wall, although the National Center for Science Education has published a summary, and NIMBioS has put out a very informative press release, with further accounts in Scientific American podcasts, the Washington Post, and the media company Vocativ.

Anyway, here is what he says, and why it matters.

We can construct a family tree for these antiscience bills. Until around 2006, they were described as Academic Freedom Acts and discuss the teaching of evolution and the origin of life. (Logically, this is a total muddle, since biological evolution does not address the origins of life, any more than chemistry addresses the origin of atoms. Rhetorically, though, it’s a smart move. Creationists often accuse biology teachers of presenting as fact highly speculative theories regarding the origins of life, and although it is decades since biology textbooks did this, mud sticks.) In 2006, an extremely alarming development took place. Ouachita Parish, Louisiana (a Louisiana Parish is much the same thing as a County in other States) developed a policy, in what they renamed a Science Education Act, that lumped together evolution, the origins of life, global warming, and human cloning. The mention of human cloning is purely for effect; we are, and I hope we will choose to remain, a long way from being able to do any such thing, and if we do it will not be in the school science lab. However, it rightly raises alarm.

One truly insidious development is the addition of global warming to the mix. In the US, although not in the UK, the doctrinally conservatism that leaves to creationism is associated with extreme political conservatism, a deep devotion to free markets and suspicion of government, and rejection of the science of global warming, because it implies the need for government (and, worse, inter-government) action. Thus there is an excellent correlation, in the US, between evolution rejection by various faith groups and climate change rejection. Since the fall from power of Tony Abbott in Australia, the United States is I believe the only nation in which one major political party denies that global temperatures are rising, and that fossil fuel burning is responsible. Thus we have the embarrassing spectacle of scientifically illiterate congressmen holding hearings to which they invite cranks and outliers, and doing all they can to sabotage the outline climate agreement recently reached in Paris. As I have said here before, evolution denial is ridiculous but climate change denial is dangerous.

Even more worrying to me is the spread of voucher systems, under which the local government does not run the education system itself, but issues vouchers to all eligible schoolchildren, to pay for their education by non-government schools. MSNBC reports that there are hundreds of such schools teaching creationism as a taxpayer’s expense in nine States and the District of Columbia.

And worst of all is the fact that creationism happens because people want it to. Which means in turn that often there is no effective opposition, either in the community or in the classroom. According to an article in Science, Defeating Creationism in the Courtroom, But Not in the Classroom (2011, 331:404, paywall), timed to roughly match the 5th anniversary of Kitzmiller, around 11% of US biology teachers actually teach creationism, 28% teach evolution according to guidelines, and the remaining 60% avoid the topic because they do not feel prepared to deal with the hostile questioning that it will evoke. Top down imposition of evolution may, alas, be necessary, but it is certainly not sufficient.

Comic relief time: This work has not received universal approbation. At the mendaciously mistitled Evolution News and Views, no less a person than John G. West, political scientist, acolyte of C. S. Lewis, and Vice President of the Discovery Institute, goes to the heart of the matter:

Professor West has done us all the great service of looking up the grants that funded Matzke during this work. One of them, he reveals, was earmarked for studying the phylogeny of shellfish. But creationists are not shellfish, so Nick has been very, very naughty. This is not the first time that Discovery Institute fellows have found it necessary to rebuke him. Casey Luskin has pointed out that he is known to have actually received money from the National Center for Science Education (he was employed by them at the time), so no wonder he supports evolution. And two days later David Berlinski criticised him for criticising Stephen Meyer for not using cladistics, because Berlinski thinks you shouldn’t use cladistics, because if you imagine that a cladogram is a geometrical, rather than merely a topological, representation, you can get the wrong answer. (As it happens, the only time I have met this mistake is in the pages of Of Pandas and People, which is roughly where we came in). You can find the whole shocking story here, and I hope that Nick takes these lessons to heart.

1] In the case of biological species, things can get a little more complicated, if only because we are dealing with interbreeding groups, within which genetic material is duplicated and shuffled, rather than unique copies. So species can split while still carrying more than one version of a gene. For example, the genes coding for Type A and Type B blood groups arose by mutation from a common ancestor, at some time more remote than the common ancestor of humans and chimpanzees, and both types were present on both sides of the chimp-human split. Thus a human with blood type A will, with respect to just that single gene, be more closely related to a chimp with the homologous blood type than to a human of blood type B. For this reason, all evolutionary trees are fuzzy. There is also the matter of horizontal transfer, in both biological and meme evoultion.