Political bullshit was with us before the rise to dominance of on-line news sources, but developments over the past decade have made things far worse. Philip N. Howard, Professor of Internet Studies at Oxford, studies of fake news and elections, and way back in 2014 he coined the phrase “computational propaganda” to describe what was happening.

Opportunity for such propaganda is built into the very fabric of mass social media. Targeted ads and “suggestions” protocols are not optional features; they are what Facebook is for. People join groups that they agree with, and discussion among like-minded people moves consensus further away from the middle ground. Facebook’s recommendation system makes things even worse. An investigator for Buzzfeed, having signed up for antivaxx sites, found herself getting recommendations for groups about Pizzagate, the perils of fluoride, chemtrails, and Flat Earth.

Facebook also makes it easy to propagate fake news under false flags. Thus the page “Native Americans United”, apparently from the Dakota Pipeline protesters, with the message “Love water Not Oil, Protect Our Mother,” was produced by the Internet Research Agency, a Russian troll farm. The same people also gave us a page “Black matters”, ostensively part of the Black lives Matter movement. Special Prosecutor Mueller has indicted 13 members of this troll farm, though they are clearly unlikely to ever enter his jurisdiction.

False news has a further advantage over reality on social media because it is generally more novel and attention-grabbing. Thus an analysis of Twitter shows that false news spreads faster, deeper (longer chains of transmission), and more broadly (total number of tweets) than true news. This seems to be the work of individuals, rather than bots. See here; full report here. 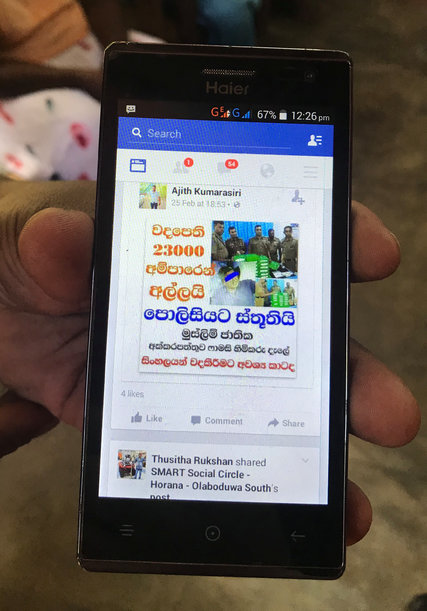 L: Via New York Times, A false Facebook claim from Sri Lanka : “23,000 sterilization pills caught in Ampara. Thank you to the police. Muslim pharmacy owner from Akkaraipattu arrested. Who wants to sterilize the Sinhalese?”

Algorithms, bullshit, and the dismantling of democracy; (1) Bullshit

Bullshit is sticky, and by trying to stamp on it you spread it. Because its appeal is directly to the emotions, rational critique is beside the point, while virtuous outrage is as effective as support in sending it viral.

The term bullshit was introduced in its current sense by the philosopher Harry Frankfurt in 2005, and has been the subject of a rash of books since Trump’s emergence as a force to be reckoned with. I have chosen this particular volume as my jumping off point, because I am familiar with the author’s UK perspective, and because the author himself, as a contributor to Buzzfeed, is part of the revolution in electronic publishing that has made bullshit so much easier to propagate.

Lying is lying; bullshit is different

Lying is misrepresentation of reality. Bullshit is something far more serious. Bullshit invites us to follow the leader into a world of subjectivity, where reality comes second to what we choose to believe. Bullshit is the delegitimisation of reality, designed to make rational discussion impossible. It is the triumph of assertion over reality.

This book names names. Boris Johnson (for more on Johnson’s chronic mendacity, see here) the Daily Mail (which is world’s largest news website, because of focus on celebrities), the Canary,1 Brexit, the Daily Express, and, of course, Trump. He also mentions END_OF_DOCUMENT_TOKEN_TO_BE_REPLACED

Buried in an email from Yahoo, I found

So I opted out. But how I now appear to them still includes my device IP address, so I don’t know if that really achieved much.

The email led me to the revised terms of service for Yahoo mail,and much much more (see their illustration) now part of the conglomerate formerly known as AOL-Verizon:

Oath is home to the sites and apps you know and love, such as HuffPost, Tumblr, Yahoo Mail, TechCrunch and many more.

Our stories and services connect with 1 billion people around the world every day.

Our technologies make sure you have experiences that reflect your passions, interests and goals.

Which is exactly how I do feel right now. One billion bought and sold.

“It takes a team

Sometimes it takes teamwork to bring you the experiences that you expect and want. We may provide information to our parent company Verizon, our partners and other parties for product improvements, research and analysis, and to help them provide you with more relevant experiences and ads.”

END_OF_DOCUMENT_TOKEN_TO_BE_REPLACED

Reblogged from Coel’s blog, where I commented: My own best bet for intelligent life elsewhere would be aroud a red dwarf. More of them, and far longer lifetimes. Our own Sun was nearly half way through its useful lifetime before earth had multicellular organisms. More also, at PhysOrg’s Are we alone? NASA’s new planet hunder aims to find out.

With the launch of NASA’s TESS satellite due this very day, this is a popular-level account of TESS and exoplanet hunting that I wrote for The Conversation. Actually this is my version, prior to their editing.

at the stars in the night sky and wondered whether they are also orbited by planets; our generation is the first to find out the answer. We now know that nearly all stars have planets around them, and as our technology improves we keep finding more. NASA’s newest satellite, TESS (the Transiting Exoplanet Survey Satellite), scheduled for launch on Monday, will extend the hunt for small, rocky planets around nearby, bright stars.

We want to know how big such planets are, what orbits they are in, and how they formed and evolved. Do they have atmospheres, are they clear or cloudy, and what are they made…

When dinosaurs roamed the Western Isles

Quite a challenge, I expect, to the local Free Presbyterians.

My friend Kim Johnson commented on the strange appearance of the footprints, Steve Drury (author of the blog of which this is just an annotated repost) referred me to Paige Depolo, senior author of the paper on which Steve’s post is based, and Paige replied as follows:

When it comes to the depositional environment, the tracks were formed in a low-energy lagoon and are generally preserved today as impressions into shaley limestone. Later, additional limestone layers were laid down at the site and in-filled the impressions. Those layers form the casts that we can still observe for some of the tracks today. In some cases at this site, the cast remains while the surrounding impression which it was originally infilling has been almost completely eroded. These rocks were deposited during the Middle Jurassic. Later, likely during the Paleogene, a sill was intruded immediately below the track bearing layer and the surrounding rocks were baked. The low-level contact metamorphism of the track-bearing layers definitely makes for some interesting looking exposures!

h/t Kim and Steve, and many thanks to Paige The Isle of Skye off the northwest coast of Scotland  is known largely as a prime tourist destination, such as Dunvegan Castle with a real clan chief (The MacLeod of MacLeod) and its Faerie Flag; Britain’s only truly challenging mountains of the Black Cuillin; and, of course, the romantic connection with the Young Pretender, Charles Edward Stuart and his escape, in drag, from the clutches of the Duke ‘Butcher’ Cumberland, hence the Skye Boat Song. Geologists know it best for its flood basalts with classic stepped topography and the exhumed guts of a massive central volcano (the Cuillin), relics of the Palaeocene-Eocene (62 to 54 Ma) North Atlantic Large Igneous Province. The spectacular Loch Coruisk, a glacial corrie drowned by the sea, exposes the deepest part of the main magma chamber. It is also the lair of Scotland’s lesser…