My “Islamic Foreshadowing of Evolution” has appeared in Muslim Heritage.

I am published in Muslim Heritage.

Gloriously illustrated by the Muslim Heritage editorial team; so much for the common impression that Islam forbids representational art. 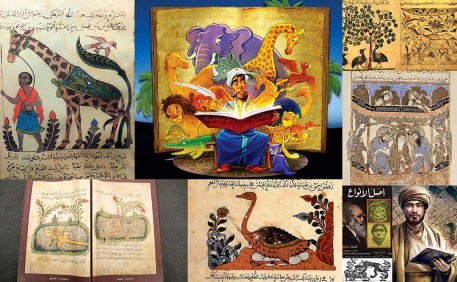 I briefly describe present-day evolution science, and why the evidence for this is considered overwhelming, having earned endorsements from national academies worldwide, including the academies of several predominantly Muslim countries.

I show how Muslim thinkers (especially Al Biruni and Ibn Sina) went beyond Aristotle’s mere assertion that the Earth is old (for Aristotle, infinitely old), by observing and discussing fossils and sediments in an unmistakably scientific manner. I also discuss widespread claims that Islamic scholars had anticipated modern evolutionary thought, and come to the sad conclusion that these are not warranted. What is being described, by sources as diverse as the poet Rumi, the Ikhwan al-SafaI (Brethren of Purity, 8 – 10 C CE), and the pioneer social scientist Ibn Khaldun in 1377 CE, is the Great Chain of Being, derived from Aristotelian thought, and represents stages of development, but does not imply common descent, or change over time. I also look at the claims made on behalf of al Tusi, but fear that these will not stand examination.

The one clear example that I do find of anticipation of the central ideas of mutability of species and common descent comes from al Jahiz’s delightful Kitab al-Hayawan (Book of Living Things, 9 C CE), where among much other interesting material (though the story of birds cleaning crocodiles’ teeth is, alas, suspect) he correctly suggests common ancestry for wolves, dogs, and foxes.

The Crocodile from The Book of Animals by Al-Jahiz Credit: © Veneranda Biblioteca Ambrosiana, Milan, Italy/Bridgeman Images, via PhotoEditor61

I would be delighted to hear of other examples, provided these are accompanied by links to reliable translations (I regret that I cannot read Arabic or Persian) of the original material. I am of course aware of a great deal of twentieth and twentyfirst century literature that makes such claims, but on examination I have so far found these to be simply back-projection. We must also remember that earlier thinkers must be judge in the context of their own times, that they were unaware of the significance that observations would require at a later stage, and that to judge them according to how well they happen to agree with us, with our vastly expanded knowledge base, is unhistorical and, indeed, patronising.

On the relationship between evolution and Islam, I have this to say:

It is not my place to discuss this. I will merely point out that debate between those who accept and those who reject evolution can be found within all the Abrahamic religions, with discussion hingeing on the ways in which the ancient sacred text should be interpreted by a modern reader (Marwa Elshakry, of Columbia University History Department gives a scholarly account1). There are those who protect traditional interpretations by rejecting evolution, but such rejection carries a high cost since it creates a conflict between faith and worldly knowledge. And there are those who attempt to evade this conflict by denying the plain scientific facts; here the cost is even higher. There was a recent vigorous discussion of these topics organized by the Deen Institute,2 and the scientific academies of Bangladesh, Egypt, Indonesia, Morocco, Pakistan, Palestine, Turkey and Uzbekistan have joined others worldwide in affirming evolution.3

On the Muslim Heritage Facebook page, my article has received over 2000 “likes”. I am grateful to the editorial staff of Muslim Heritage for inviting me to contribute this article, and to Ehab Abouheif, Jim Al-Khalili, Glenn Branch, J. E. Montgomery, Cem Nizamoglu, Rebecca Stott, and Douglas Theobald for helpful discussions.

I will be posting a fuller summary of my rather lengthy article in due course.

3] interacademies.net: IAP on the Teaching of Evolution

The Little Puddlian Philosophical Society and the Fine Tuning Argument

Puddle theory, according to Wikipedia, is “a term coined by Douglas Adams to satirize arguments that the universe is made for man. As stated in Adams’s book The Salmon of Doubt:

“imagine a puddle waking up one morning and thinking, ‘This is an interesting world I find myself in, an interesting hole I find myself in, fits me rather neatly, doesn’t it? In fact, it fits me staggeringly well, must have been made to have me in it!’ This is such a powerful idea that as the sun rises in the sky and the air heats up and as, gradually, the puddle gets smaller and smaller, it’s still frantically hanging on to the notion that everything’s going to be all right, because this World was meant to have him in it, was built to have him in it; so the moment he disappears catches him rather by surprise. I think this may be something we need to be on the watch out for.”

I yield to no one in my admiration for Douglas Adams, and admire here in particular his reminder that our place in the Universe may really be rather precarious. However, on this occasion he had been anticipated. END_OF_DOCUMENT_TOKEN_TO_BE_REPLACED 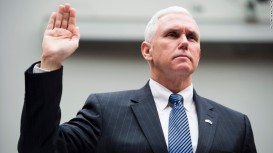 The now Vice-President of the United States stands accused of having said that evolution is “just a theory”; see here and here. No he did not say that. What he did say (full text below, with notes) was far, far worse. Much more detailed and much more dangerous.

L: Pence being sworn in as a member of the House Education and Workforce Committee (CNN)

After reminding us that he was trained in law and history, he mangles the historical facts and legal significance of a key court case (the Scopes trial).

By quotemining a secondary source,* which he treats as if primary, he twists the then-recent discovery of Sahelanthropus into an argument against the underlying science. It is changeable, he argues, therefore it is uncertain.

He justifies this manoeuvre by harping on the ambiguous word “theory”, and making a falsely rigid distinction between theory and fact.

Below, R: Sahelanthropus tchadensis, photo of cast by Didier Discouens, via Wikipedia

And worst of all, he asks his colleagues to “demand [emphasis added] that educators around America teach evolution not as fact, but as theory”. The proponent, when it suits him, of small Government wants Washington to tell teachers how to teach.

Pence has been accused of stupidity because of the factual and logical errors contained in his speech. On the contrary, END_OF_DOCUMENT_TOKEN_TO_BE_REPLACED 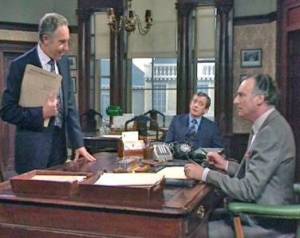 There is nothing new about the alliance between American evangelical Christianity and white supremacism, although the party alignment of this alliance has changed over the years. And one of the pleasures of blogging is how one comes across interesting facts, and interesting people. My email today illustrates both these points:

By way of introduction I am the retired bass trombonist of the Boston Symphony Orchestra and retired Professor of Trombone at Arizona State University. I am at work on a book for University of Illinois Press about Homer Rodeheaver, the trombone-playing song leader for Billy Sunday in the first third of the 20th century.

A research thread that is currently occupying my interest is the role the Ku Klux Klan played in Billy Sunday meetings.
I came across your blog post: https://paulbraterman.wordpress.com/tag/billy-sunday/ [the link is to my post, The Scopes “Monkey trial”, Part 2: Evidence, Confrontation, Resolution, Consequences]

In the paragraph below the image of Sunday preaching by George Bellows, you write “There also was a Klan night.”

The image referred to: Billy Sunday portrait by George Bellows, Metropolitan Magazine 1915, via Wikipedia. Click to enlarge (it’s worth it)