The Science Meets Religion website, by the information scientist David Bailey, has a Q&A page that addresses the most common and most plausible scientific objections raised by creationists to the science of evolution. Twenty-six specific questions are chosen, and answered in a series of brief essays on such topics as complexity, information theory, radiometric dating, fossils, speciation, and thermodynamics. For each of these, Bailey gives a straightforward statement of the creationist arguments, and then succinctly lays out the evidence for the contrary viewpoint. The rebuttals of creationism are all the more crushing for being written with judicial dispassion. 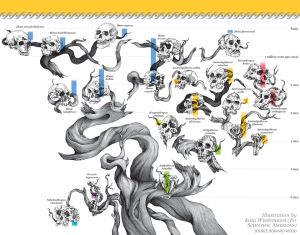 Our family tree, since we parted company with other chimpanzees

The style is accessible enough for a high school student to read with enjoyment, but the scholarship behind it is impressive. For example, the discussion of alleged missing links between humans and non-human apes gives fourteen separate references to discoveries in the last eventful half dozen years. The essays on dating methods list, and refute, nine separate creationist claims, and refer to numerous scientific sources. These include authoritative on-line reviews such as Wiens and Dalrymple on radiometric dating and Dalrymple on the fallacies in the “creation science” arguments for a young Earth, as well as some key papers fron the primary research literature. The bibliography has (at present) 764 entries, more than 50 of them from 2015, refers to the scientific, creationist, and theological literature, as well as human behaviour and its link (or not) to religious belief, and is regularly updated (most recently last September). You will find here articles on everything from the latest word on Homo naledi to the microwave spectra of distant galaxies to divorce rates.

Bailey is himself a committed Christian, and joins other Christian writers such as Dennis Venema at Biologos and Roger Wiens (whose web page on radiometric dating I cite above) in showing that the “controversy” between evolution and creationism is not so much a conflict between science and religion, as a battle within religion itself. As the Scopes trial anniversary reminded us, this civil war in its current form dates back a century, to the conflict between Modernists and Fundamentalists. (The underlying issues, of course, are far older, and Bailey’s bibliography gives three references to Augustine.)

Some of my fellow unbelievers think the best way to advance the cause of enlightenment is to attack religion. I regard this course as mistaken, psychologically, philosophically, historically, educationally, and tactically. I think that the followers of any religion face major problems, but they are their problems, and it is not my place to lecture them on how they should be resolved.

In addition, affirmations of the validity of evolution and Old Earth geology have far greater power when they come from within the body of believers. Anyone who chooses to be misled by the claim that evolution is uncertain because it is a theory, or who prefers the absurdities of Flood Geology to the evidence of their own eyes, is in need of intellectual liberation, but such liberation can only come from within, and will come far more readily given the encouragement of members of their own faith community.

I conclude by illustrating this point with a paragraph from Bailey’s critique of Intelligent Design:

One overriding difficulty with both the creationist and intelligent design movements is that invoking a Creator or Designer whenever one encounters a difficult question is a “thinking stopper.” Such an approach places numerous grand questions of our existence off-limits to human investigation, buried in the inscrutable mind of a mysterious supreme Being: “Why was the earth (or the universe in general) designed the way it was?” “How did the design and creative processes proceed?” “What physical laws were employed?” “Why those particular laws?” “What prompted the creation?” “Have other earths or universes been designed or created?” “Where are they?” Surely there is a more fruitful avenue for finding a harmony between science and religion than just saying “God created and/or designed it that way” and then deeming it either unnecessary or inappropriate to inquire further.

Here we have a powerful statement, far more powerful because it comes from a committed believer,  of why such doctrines are not merely stupid irrelevancies, but active obstacles in the search for religious, as well as scientific, understanding.

David Bailey’s professional website is here; his professional homes are Lawrence Berkeley Laboratory and (current primary affiliation) University of California, Davis. I learnt of his work through a post on Scott Buchanan’s Letters to Creationists. David uses the hominin evolutionary tree that I show here (taken from Scientific American’s September 2014 special issue on evolution) to illustrate what we do and do not know about our species’ grandparents and great-uncles.