A petition by the Scottish Secular Society to stop ‘neo-creationism’ being taught in schools was backed by three Nobel-winning British scientists, including Sir Harold Kroto, above

This story has made it to the “Headlines” news feed! My comment on the story, published in the Heerald’s web version  [links added]:

It does not matter what classroom we are in. It is simply not true, and has not been true for generations, that evolution (including macroevolution) and common descent are what C4ID calls in its statement to Parliament “undemonstrated and speculative”.

If any group wanted to tell schoolchildren that the existence of atoms was undemonstrated and speculative, that would be equally objectionable. However, it is only in the case of evolution and the age of the Earth that we have organisations dedicated to misinforming.

The C4ID full statement to Parliament is at the petitions website;. As I show in my response, it takes a position much further removed from scientific reality than Dr Noble’s disingenuous remarks here would suggest.

The full story is here, and comment on the web page is overwhelmngly favourable.

Calling on the Scottish Parliament to urge the Scottish Government to issue official guidance to bar the presentation in Scottish publicly funded schools of separate creation and of Young Earth doctrines as viable alternatives to the established science of evolution, common descent, and deep time.

Sir Richard is among those presenting the 2004 Ig Nobel Peace Prize to Daisuke Inoue, inventor of Karaoke (photo: Improbable Research)

On Friday, Sir Harold Kroto was the first Nobel Laureate to sign this petition. He has now been joined by Sir Richard Roberts, FRS, now Chief Scientific Officer at New England Biolabs.

Sir Richard shared the 1993 Nobel Prize in Physiology or Medicine for his work onintrons and splicing in eukaryotic cells, i.e. cells of the kind found in all plants and animals, which unlike those of bacteria and archaea possess a well-defined nucleus. This, of course, gives him a direct interest in the mechanisms of inheritance, and evolutionary pathways.

Sir Harold with models of fullerenes. The simplest, C60, is shaped like a soccer ball

Sir Harold Kroto, FRS, Hon. FRSE, Nobel Prize winner, Professor Emeritus at the University of Sussex and Francis Eppes Professor of Chemistry and Biochemistry at Florida State University, has lent his support to this petition from the Scottish Secular Society to the Scottish Parliament requesting guidance to preclude the teaching of creationism as factually valid in Scottish schools.

Sir Harold is best known to the general public for his part in the discovery of a new form of carbon, C60 or the bucky-ball molecule, for which he shared the Nobel Prize for Chemistry in 1996. But this represents only a small part of his interests in science and in science outreach. He is no stranger to Scottish affairs, being an Honorary Fellow of the Royal Society of Edinburgh, and his talk at the Glasgow Tron on science outreach in the age of digital communication remains fresh in the minds of those privileged to have witnessed it.

But why, in the 21st century, is any of this necessary? Here’s why:

This was handed out to all pupils at Kirktonholme Primary, a non-denominational school, last September

Creationist school chaplains and chaplaincy team members. Creationist appointees on Local Authority Education Committees. Openly Creationist organisations targeting schools. Scandal when Young Earth Creationist materials distributed in school assembly. And still the Scottish government lags behind England, and refuses to give simple guidance, to the effect that Creationism should not be taught as scientific truth. The Scottish Secular Society (a faith-neutral organisation) is therefore petitioning the Scottish Parliament

to urge the Scottish Government to issue official guidance to bar the presentation in Scottish publicly funded schools of separate creation and of Young Earth doctrines as viable alternatives to the established science of evolution, common descent, and deep time.

If you support us in this, click here to sign: http://www.scottish.parliament.uk/gettinginvolved/petitions/creationismguidance The petition materials include details of how the Scottish Government has repeatedly refused to give guidance when asked, saying that the teachers themselves will be able to deal with the matter professionally. For details on why this is an inadequate response, and on why teachers themselves need protection from creationist pressures, read on: 1) Membership of Local Education Authority Education Committees By law, every local education authority in Scotland (the employer to whom teachers are ultimately answerable) has to include three unelected representatives of religious organizations. As of June 2013, these included four Baptists and five representatives of other infallibilist groups. Among these, the church of Rev David Fraser (Baptist, Clackmannanshire) recently announced the finding of Noah’s Ark; Michael Rollo’s Larbert Pentecostal Church/Assemblies of God (Falkirk) believes in biblical infallibility, bodily resurrection, and “the everlasting conscious punishment of all whose names are not written in the book of life;” Mark Fraser is Assistant Pastor/Youth Minister of The Bridge Church, Irvine (North Ayrshire), which believes in a literal lake of fire and in divine healing through the laying on of hands; Dr Nagy Iskander, of Westwoodhill Evangelical Church (South Lanarkshire) is an eloquent spokesman for Answers in Genesis and Young Earth creationism; while in the Western Isles the Church of Scotland Presbytery of Lewis, the Free Church of Scotland, and the Free Presbyterian Church vie with each other in their commitment to biblical literalism and, by implication, to the denial of evolution and deep time. 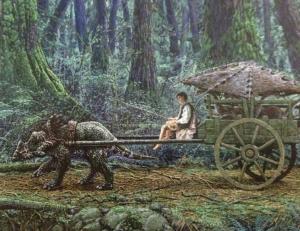 From Truth be Told, one of the books handed out to children at Kirktenholme Primary

3) Other interactions of creationist organisations with schools People With A Mission Ministries (PWAMM) is an unashamedly Biblical Evangelical organisation – and why not? However, it operate the Challenger bus which regularly visits schools in the North of Scotland and the Isles, displaying there Answers magazine, a Young Earth creationist publication put out by Answers in Genesis, which also features on the PWAMM book store site (http://pwamm.com/eshop/index.php?app=gbu0&ns=prodshow&ref=ANSWERS). PWAMM also offers RME courses, which it claims to be compatible with the Curriculum for Excellence.

“The purpose of Answers magazine is to illustrate the importance of Genesis in building a creation-based worldview, and to equip readers with practical answers so they can confidently communicate the gospel and biblical authority with accuracy and graciousness.”  — PWAMM website

In all these cases, and no doubt in many others that have not come to our attention, people with the best of intentions will be bringing creationist convictions into schools, and creating an atmosphere where it is difficult or embarrassing for teachers to challenge them. And as we have seen, some Heads will actively welcome them, either because they provide volunteer help, or because the Heads assume that all whoever claims to speak in God’s name is wise and virtuous, or both.

Creationists sincerely believe that what they say is true. Many go further, and say that believing in Creationism is an essential part of salvation. In England, they are no longer allowed to promote this corrosive nonsense at the expense of scientific reality. Scotland’s children, surely, deserve the same protection.