The reasons for the floods

Floods are inevitable. But the degree of damage that we are seeing today is the result of reckless cuts, perverse subsidies, and mindless deregulation.

First, a review of “savings” (that’s NewSpeak for “cuts”) on flood defences: 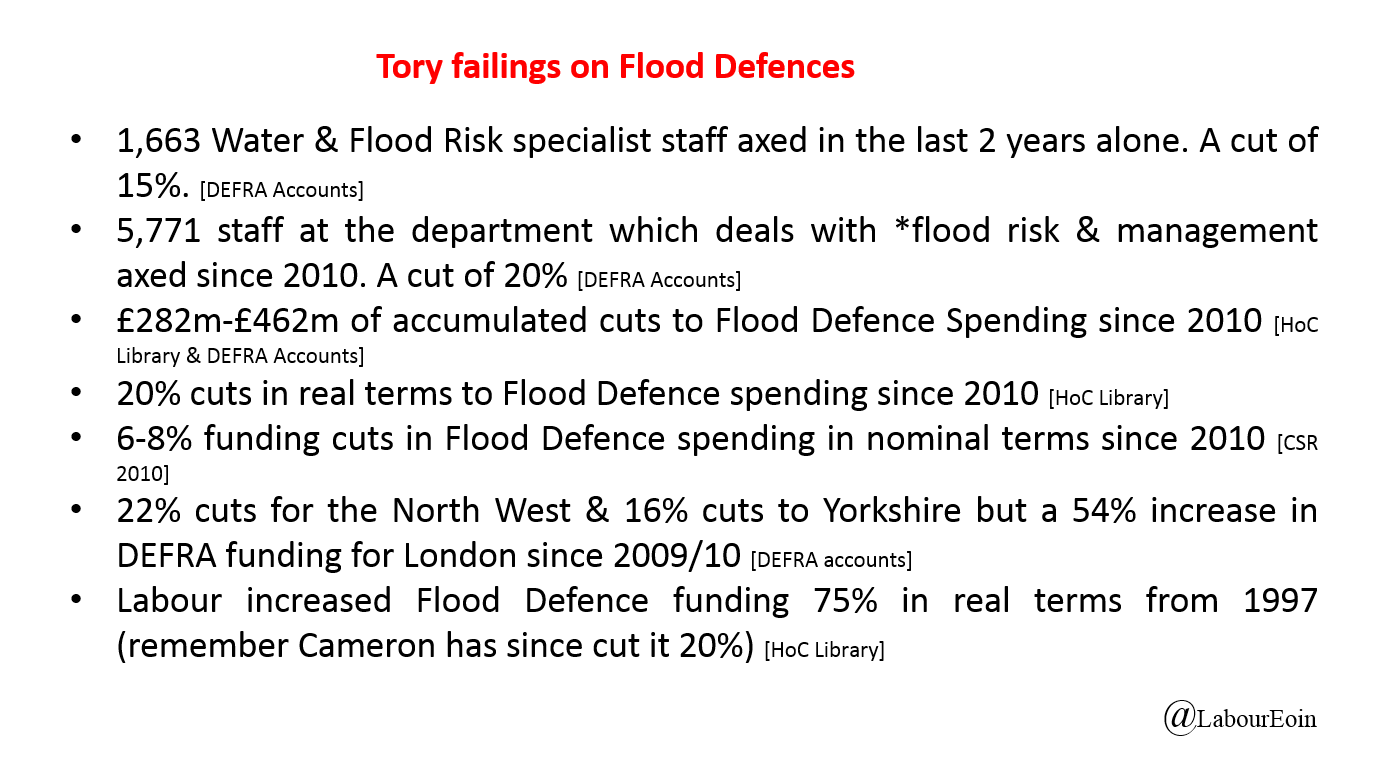 Well, Labour would say that, wouldn’t they? But @LabourEoin gives fuller links; for instance, the last set of numbers comes from House of Commons Library Note “Flood spending in England”, SN/SC/5755, 19 November 2014.

Well, maybe the Government have learned better? Then why are they cutting 6700 firefighters, who are among first responders and prevention workers in floods?

Well, maybe it is necessary to save money? It would be difficult to think of a more expensive way of saving, where every £ saved costs somewhere between £6 and £24, depending on which estimate you accept. Even if you accept government forecasts of future flood damage as accurate estimates, it makes no sense that

Under the new rules brought in three years ago, the Department for Environment Food And Rural Affairs (Defra) wanted to see an average of £8 of damage avoided for every £1 they would spend on schemes.

But aren’t things like this terribly rare? In that case, why do they happen so often? As Nassim Nichoas Taleb has pointed out (and become extremely rich by acting on his own insight) extremely rare events are more common than you think. That’s because we form our expectations from the commonplace, constructing something like a bell curve of expectations based on the fluctuations that happen all the time, but rare events can also arise from rare combinations of circumstances. Five year floods can be expected to happen every five years or so, butwe have little experience of the statistics of hundred year floods, and they may well happen much more often than once every hundred years.

[Update: for more on the frequency of “100 year floods”, and of ministerial obliviousness to explicit warnings, see here]

But can the Government be blamed for natural disaster? Yes, when its policies have directly and foreseeably contributed to it. See this from George Monbiot, in January 2014:

“Drowning in money: the untold story of the crazy public spending that makes flooding inevitable”

“How we ended up paying farmers to flood our homes”

(And more in the same vein; Google Monbiot Flooding Guardian and you will see the case argued, consistently and coherently, again and again.)

Not only is this Government cutting back disastrously on flood protection at the very time when climate change is increasing risk; it is spending lavishly on policies that help make sure that those floods will be as damaging as possible. The challenge of flooding is unavoidable, but the degree of disaster is man-made.