In praise of fallibility; why science needs philosophy, with examples from astronomy and chemistry

As Isaac Asimov reportedly said, “The most exciting phrase to hear in science, the one that heralds new discoveries, is not ‘Eureka!’ [I have found it], but ‘That’s funny …’ ” And there is nothing that distinguishes so clearly between the scientific and the dogmatic mindset as the response to anomalies. For the dogmatist, the anomaly is a “gotcha”, proof that the theory under consideration is, quite simply, wrong. For the scientist, it is an opportunity. If an idea is generally useful, but occasionally breaks down, something unusual is going on and it’s worth finding out what. The dogmatist wants to see questions closed, where the scientist wants to keep them open. This is perhaps why the creationist denial of science can often be found among those professions that seek decision and closure, such as law and theology.

The rights and wrongs of falsification 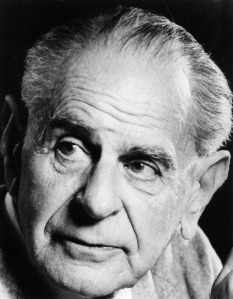 Dogmatists regularly invoke the name of Karl Popper, and the work he did in the 1930s. Popper placed heavy emphasis on falsifiability, denouncing as unscientific any doctrine that could not be falsified. Freud’s theories, for example, END_OF_DOCUMENT_TOKEN_TO_BE_REPLACED

The “scientific method”, a needless stumbling block. With a note on falsification

Science does not have a separate special method for learning about the world, the “scientific method” as taught in schools is a damaging illusion, and the falsifiability criterion has itself been falsified

Below, R: How not to; “The Scientific Method”, as inflicted on Science Fair participants. Click to enlarge 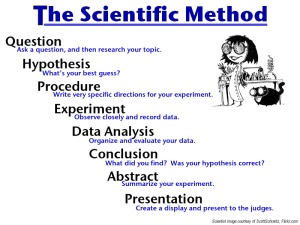 Consider this, from a justly esteemed chemistry text:

Scientists are always on the lookout for patterns.… Once they have detected patterns, scientists develop hypotheses… After formulating a hypotheses, scientists design further experiments [emphasis in original]

The scientific method in a nutshell:
1. Ask a question
2. Do background research
3. Construct a hypothesis
4. Test your hypothesis by doing experiments
5. Analyze your data and draw conclusions
6. Communicate your results [emphasis in original]

Then, if you find yourself nodding in agreement, consider this:

If you are familiar with the creation-evolution “controversy”, you may well suspect that last example of being so much creationist waffle, intended to discredit the whole of present-day geology and evolutionary biology. And you would be right. This quotation is from Duane Gish, a major figure in the twentieth century revival of biblical literalist creationism, writing for the Institute of Creation Research.1

L: Mike Pence, ” [N]ow that we have recognised evolution as a theory… can we also consider teaching other theories of the origin of species?”

Such nonsense isn’t funny any more, if it ever was. The man who may very soon find himself President of the United States is an eloquent spokesman for creationism.

And yet Gish’s remarks seem to follow from the view of science put forward in the first two excerpts. What has gone wrong here? Practically everything. END_OF_DOCUMENT_TOKEN_TO_BE_REPLACED

Jerry Coyne in Glasgow on Why Evolution is True, an unauthorised summary

This is my unauthorised summary of the talk that Jerry Coyne gave to the Glasgow Skeptics on Monday, November 26. It is no substitute for reading his outstanding book, Why Evolution is True, but I for one found it useful to see the arguments collated so succinctly.

Jerry discussed the distinction between the common and the scientific use of the terms “true” and “theory”. True, he suggested, means so well supported by evidence that it would be perverse to deny it. In principle all scientific truths are provisional because revisable, but IMO that is no reason for scientists to sound tentative all the time, since the same can be said of all our claims to knowledge about the world. Theories in science, as he very clearly explained, are the conceptual frameworks that we set up to make sense of facts, but in contrast to the common use of the word carry no suggestion of uncertainty. Examples are atomic theory, and the germ theory of disease, as well as the theory of evolution. He then went on to say that evolution had moved from theory to fact. This I think is a philosophical category mistake, though I am not sure that this matters to anyone except philosophers. I prefer to distinguish between the facts of evolution (e.g. the historical facts of shared ancestry) and the theory (referring to a historical context, or else meaning specifically the overarching conceptual framework).

The theory of evolution has five components:

(I would note here that there is room for fruitful disagreement, since other reputable biologists come up with different definitions. I also wonder whether adaptation, like speciation, is much more easily recognised after the fact, and whether, given the existence of non-adaptive drift, the linking of adaptation to selection is tautologous.)

This theory makes a number of predictions:

There are also examples of retrodictions, things that are not strictly predictions, but make sense only in the light of evolution. These include:

One significant prediction is that we should be able, to the extent that our short observation time permits, to see evolution in action, and this is what happens.

The question of the origin of new information came up in questioning. Jerry gave as an example what happens after gene duplication; the two copies can become selected for different functions, as in the variations of haem proteins. (My own favourite example is the duplication and reduplication giving rise to Photosystems I and II, each of which contain two distinct but related subsystems.)

If evolution is a scientific theory, it must be open to falsification. (Here Jerry follows Popper, whose views I think are now regarded as too simple. Theories of merit are generally modified, or subsumed within larger theories, rather than being simply rejected in the face of counterexamples. I would argue that the theory of evolution has been modified, to include such factors as neutral drift, much as atomic theory has been modified to take account of transmutation, but that such modifications are in no way a sign of weakness.) Possible falsifiers include:

Again, I see room for fruitful disagreement, in particular about what would falsify, and what would merely require minor tinkering. A number of questions come to mind. Would group selection require rejection of the theory, as I think Jerry was close to suggesting?