← The Woman Who Studied the Sun
Socrates is still mortal, but fallacies aren’t fallacious →

Reblogged from The Logic of Science, but with this comment: No one would disagree with these claims on behalf of science, and and that’s the problem.

The climate change denialists, like the smoking science denialists before them, pretend that the science is unsettled. The creationists prattle of “creation science” and “flood geology”. The extremely able and intelligent US Vice President, pandering to his creationist base, did not claim to be anti-science. On the contrary, he used the very fact of a major scientific discovery (Sahelanthropus, evolution, and the word “theory”; what Mike Pence really said) to blur the distinction between the established core and the fast-changing frontiers. And if we are to effectively defend science, we need to understand the emotional appeal of the ideology that leads to the rejection of vaccination, medicines, and GMOs, and to the prejudging of complex arguments in such cases as fracking and nuclear power.*

We need to think very carefully about tactics. If we seem to be saying anything like “Science is a good thing, therefore you should trust the scientists”, we are playing into the hands of our enemies. We are right to demonstrate and protest when science is denied, or ignored,  or muzzled.  And yet people (that’s all of us) believe what they want to believe.  The task  then is, how to persuade people to want to believe  in the evidence?

Why should you support science? Because it works! It’s crazy to me that I even have to say that, but this is where we are as a society. Various forms and degrees of science denial are running rampant throughout our culture, and attacks on science are being disseminated from the highest levels. Indeed, it has gotten to the point that hundreds of thousands of scientists and science enthusiasts like myself feel compelled to take to the streets to march for science and remind everyone of the fundamental fact that science works and is unparalleled in its ability to inform us about reality and improve our world. 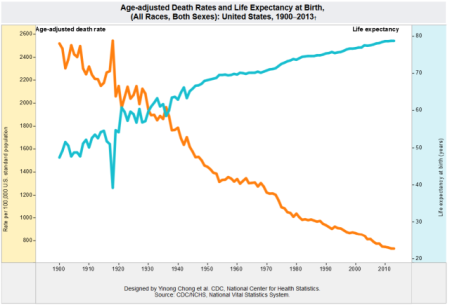 Image via the CDC

Just look around you. Everything that you see was brought to you by science. The batteries that power your electronic devices are a result of scientific advances in chemistry, as are the plastics that make up seemingly everything in our…

← The Woman Who Studied the Sun
Socrates is still mortal, but fallacies aren’t fallacious →