Don’t say Darwin unless you mean it. Above all, don’t say “Darwin” when you mean “evolution”. It’s like saying “Dalton” when you mean atoms. Our understanding of atoms has moved on enormously since Dalton’s time, and our understanding of evolution has moved on similarly since Darwin’s. Neither of them knew, or could have known, anything about what caused the phenomena they were talking about, and both would be delighted at how thoroughly their own work has been superseded.

Imagine if a lot of people decided that atomic theory was against their religion. We would see a parallel world of sacred science, in which molecules were “intelligently constructed”, and real chemistry would be referred to as Daltonism, or possibly, these days, neo-Daltonism. The scientific dissidents From John Dalton’s A New System of Chemical Philosophy (1808)

from Daltonism would invoke Dalton’s name on every possible occasion, and draw attention to the many inadequacies of atomic theory as he presented it in 1808. Dalton didn’t know anything about the forces that hold atoms together, which depend on electrons and quantum mechanics. In fact, he didn’t even know about electrons. Worse still, he was hopelessly muddled about the difference between a molecule of hydrogen and an atom of hydrogen. He thought that the simplest compound between two different elements A and B would have the formula AB, so that water must be HO, not H2O. And of course he knew nothing about the origin of atoms, a problem not solved until the 1950s, over a century after his death. Shot through with errors and inconsistencies; nonsense, the lot of it!

Darwin was ignorant of transitional fossils, and in words still quoted by creationists deplored their absence as the greatest objection to his theory. He was equally ignorant about the origin of biological novelty, which comes from mutating genes. In fact, he didn’t even know about genes. And because he did not realise that inheritance occurred through genes, he could not explain why favourable variations were not simply diluted out.

It would be decades after his death before we could even speculate coherently about the origins of life, and despite tantalising clues it remains a largely unsolved problem. But despite this, we have learnt an enormous amount since the publication of On The Origin of Species, and everything that we have learnt is consistent with, indeed requires, the key concepts of evolution and common descent.

Finally, he saw evolution as driven by natural selection, embracing Herbert Spencer’s reference to “the survival of the fittest”, whereas now it is increasingly apparent that much evolution depends on neutral drift, and that major evolutionary changes may even require passing through marginally less fit intermediates (see my next post here). So, ironically, the term “Darwinian evolution”, describing as it does evolution driven by natural selection, is now used in the scientific literature to refer to just one special case.

And while we’re on the subject of how words are used, don’t say “theory of evolution” when you mean the well-established facts of change over time and common ancestry. And if you find yourself in the position of explaining the difference between a scientific theory (coherent intellectual structure developed to explain a range of observations), and the use of the word “theory” in everyday use (provisional hypothesis), you have blundered into a morass. Back out again.

And don’t say that you “believe in” evolution. It’s not a matter of believing, with its suggestion of committing oneself beyond the evidence; it’s a matter of accepting where that evidence leads.

“Accepting”, indeed, might be a very useful word, especially when dealing with religiously motivated creationist students. If such a student accepts that the evidence points towards evolution, and understands why, then any religiously motivated inner reservations are a matter for the student, not for you.

But back to Darwin. Why is discussion of evolution still saturated with his name? In part, I think, because that’s the way his opponents want it. By identifying evolution with Darwin, they continue to breathe life into the controversies of the mid-19th century. At the same time, it helps them pretend that modern biology is just one individual’s point of view, rather than a mature science based on the work of thousands of investigators. Recently, creationists have even taken to invoking Darwin himself for their cause, in such titles as Darwin’s Doubt and Darwin Strikes Back. This is an extremely powerful rhetorical tool, whereby anything that puzzled Darwin can be used to undermine us “Darwinists”. Closely related is the device of presenting creationism under the guise of even-handed debate, as when a creationist pseudo-textbook (which mentions Darwin on almost every page, but not in the index) calls itself Explore Evolution; the arguments for and against neo-Darwinism, or in the list below, where a creationist comic goes by the name, What’s Darwin got to do with it? A friendly discussion …

You can see what I mean if you just look at the names of the books written by the enemies of scientific biology, from Darwin’s Doubt (Meyer, 2013) back to Darwin’s Black Box (Behe, 1996) and beyond. There are other examples, such as The Darwin Conspiracy (Roy Davies, 2006), which portrays Darwin as a plagiarist, and, while checking its details, I discovered an even more lurid book of the same name by John Darnton, which portrays him as a murderer. To be fair, Darnton does not pretend that he is writing anything other than fiction, although surely he was writing with half an eye on the creationist market.

To further test my idea, I went online to Amazon.com, and typed “Darwin” and “Darwinism” in the search window (I regularly search on Amazon, but prefer to buy from Better World Books or Wordery). Here are some of the books by creationists that I came up with; a lot of the names were all too familiar, but I never realized that Rick Santorum had actually got his name on a book.  There were also references to “materialist neo-Darwinism”, but since I don’t pretend to know what a “materialist” is, and whether I or for that matter Darwin would qualify, I decided to let those ones go. The most recent entry (December 2016) is one I heard about through the Discovery Institute, who also published it. 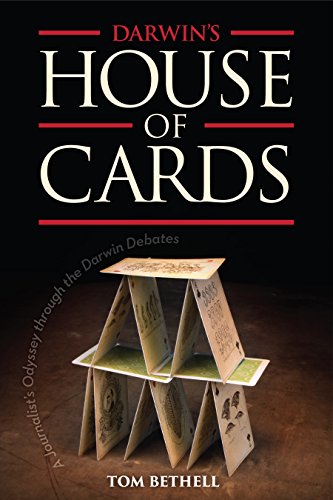 Darwin’s House of Cards: A Journalist’s Odyssey Through the Darwin Debates, 2016, by Tom Bethell who “presents a concise yet wide-ranging tour of the flash points of modern evolutionary theory, investigating controversies over common descent, natural selection, the fossil record, biogeography, information theory, evolutionary psychology, artificial intelligence, and the growing intelligent design movement.” Bethell is a philosophy graduate, despite which he repeats the myth [2] that Popper regarded evolution as mere tautology.

God vs. Darwin: The Logical Supremacy of Intelligent Design Creationism Over Evolution (M. S. King, 2015): “Ever since its inception, the edifice of Evolutionary Darwinism has rested upon a foundation of sand, propped up solely by media hype, public ignorance and extreme intellectual bullying.”

Darwin’s Doubt (Meyer, 2013) For the fashioning of this phrase in the creationist quote mine, see here. For Donald Prothero‘s devastating review of the book, see here.

The Dark Side of Charles Darwin (Jerry Bergman, 2011) Blurb: “A single man stands behind the greatest deception in history.”

Evolution by Intelligent Design: Debate is Over – Darwinism is Extinct (Gabor Lingauer, 2011) 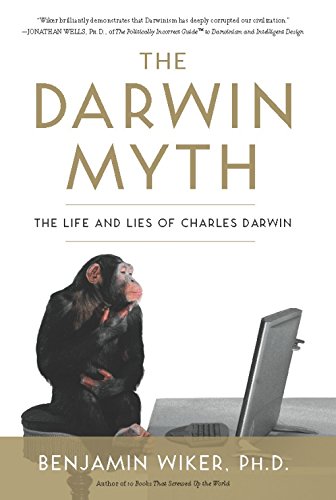 The Deniable Darwin and Other Essays (David Berlinski, 2010; I have written about Berlinski here)

What Darwin Got Wrong (Jerry Fodor and Massimo Piattelli-Palmarini, 2010) Apparently based on confusion between mutation, source of novelty, and selection, imposer of value.

The Darwin Myth: The Life and Lies of Charles Darwin (Benjamin Wiker, 2009)

Explore Evolution: The Arguments For and Against NeoDarwinism, (Stephen C. Meyer, Scott Minnich, Jonathan Moneymaker and Paul A. Nelson, 2007; this fraudulently misnamed creationist pseudo-texbook is discussed further here on the Briths Centre for Science Education website.

The Edge of Evolution: The Search for the Limits of Darwinism (Michael Behe, 2007; since Behe clearly believes that biological complexity is the work of a designer who operates independently of natural laws, I include him as a creationist, although he would deny this)

Darwin Day In America: How Our Politics and Culture Have Been Dehumanized in the Name of Science  John G. West, 2007)

Doubts About Darwin: A History of Intelligent Design (Thomas Woodward, 2007)

Darwinism, Design and Public Education (John Angus Campbell and Stephen C. Meyer, 2003) Blurb: if science education is to be other than state-sponsored propaganda, a distinction must be drawn between empirical science and materialist philosophy.

Darwinism and the Rise of Degenerate Science (Paul Back, 2003) Blurb: many of the constructs of evolution are based on fantasies devoid of scientific credibility.

The Collapse of Darwinism: Or The Rise of a Realist Theory of Life (Graeme D. Snooks, 2003)

The Case Against Darwin: Why the Evidence Should Be Examined (James Perloff, 2002)

What’s Darwin Got to Do with It?: A Friendly Discussion About Evolution (between a bright young creationist and a stuffy stooge; Robert C. Newman, John L. Wiester and Janet Moneymaker, 2000)

Tornado in a Junkyard: The Relentless Myth of Darwinism (James Perloff, 1999)

In the Minds of Men: Darwin and the New World Order (Ian T. Taylor, 1996) Blurb: Creation Moments is pleased to bring you what has been hailed as the classic work on the creation-evolution issue!

Darwinism : The Refutation of a Myth (Soren Lovtrup, 1987)

And so on, all the way back to The Refutation of Darwinism: And the Converse Theory of Development; Based Exclusively Upon Darwin’s Facts (T Warren O’Neill, 1879)

This version is an expansion of what appeared on 3 Quarks Daily, 6 Feb 2017

1] Betsy DeVos herself has not ccommented publicly on the issue. When asked about junk science teaching at her confirmation hearing, she said that she supports science teaching that “allows students to exercise critical thinking.” In the US,this unexceptionable objective is code for teaching, as if scientifically valid, denialist objections to evolution and climate change science.

2] At one point, Popper described Darwinism as “not a testable scientific theory, but a metaphysical research programme—a possible framework for testable scientific theories.” However, as other passages show, he is using “Darwinism” here in its proper restrictive sense of the theory that evolution is driven by the survival of the fittest. Popper repeatedly made clear his acceptance of the historical fact of evolution; for a full discussion see here.