Linguistic Creationism and the Tower of Babel 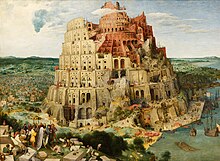 The Tower of Babel by Pieter Bruegel the Elder (1563), via Wikipedia

This from Uncyclopedia by way of my friend John Zande’s Superstitious Naked Ape.  To the arguments used there, I would add the following:

If English is derived from German, why are there still Germans?

No one has ever observed one language change into another. Were you there?

The real reason why people deny that the different languages were created by God, is so that they can use bad language. After all, if language is not God-given, there are no objective standards and anything goes.

And when I first came across the arguments below, I thought that no one could really be using them to defend the Tower of Babel story. I was wrong. See e.g. Creation and Human Language (Creation Social Science Quarterly) and The Origin of Language (Creation Magazine); h/t John Zande. Links to creationist sites are nofollow.

The following is taken directly fromUncyclopedia.

Linguistic Creationism is a theory stating that all of the natural languages could not have developed naturally, so they must have been intelligently designed by God when he destroyed the Tower of Babel.

Irreducible Complexity: If you remove letters from the word “book” you get “ook”, “bok” and “boo”, all of which are nonsensical and hence not sustainable by usage for subsequent evolution into meaningful words. It is thus impossible that the word “book” developed from any other word, it must have been created by God so in order to be used.

Improbability of spontaneous linguistic genesis: It is highly improbable that even the simplest English sentences were formed from alphabet letters spontaneously, since the odds of monkeys banging away on hypothetical typewriters and in so doing generating a readable and semantically meaningful text is vanishingly small. Hence the English language…

Posted on July 24, 2015, in Creationism, Evolution and tagged John Zande, Language, Superstitious Naked Ape, Were you there?. Bookmark the permalink. 12 Comments.